We are still 13 people on station…

More people were scheduled to have arrived by now. There have been hold ups on the route from Cape Town to Novo outside of BAS’s control but these will hopefully be resolved this coming week. There is quite a lot of work building up that we need more bodies for but having less people on station does make it a little more peaceful on the living front. I think we are all enjoying that.

We are all staying in the Drewry building while the tech team work at getting the modules up and running. As more people arrive we will need the Modules living space, kitchen and bed spaces, but the Drewry sleeps about 30. I put a little short post with some pics at the end of last season here.

As we were expecting more people, it was crucial to gain access to more food. Up until now I have been working with what dry stores we stocked the Drewry with and some frozen food that had been buried at the end of last season. The buried supplies were in two different locations but both survived the winter well and proved invaluable at start-up this season. 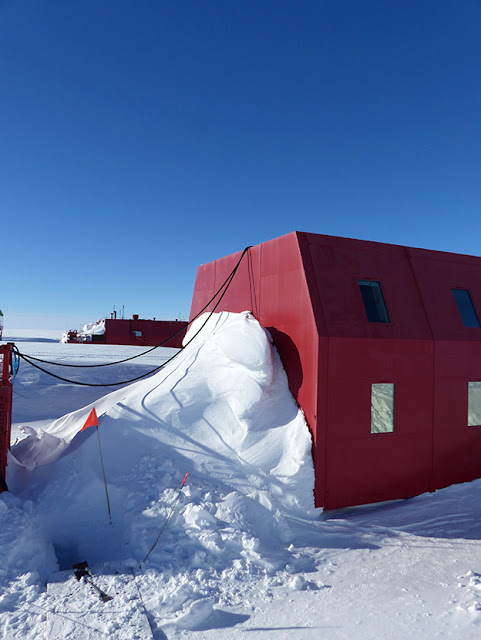 The freezer hole marked by flags. It's covered by two boards - one of which I can dig free and pull out to gain access. That's some good snow build up behind! 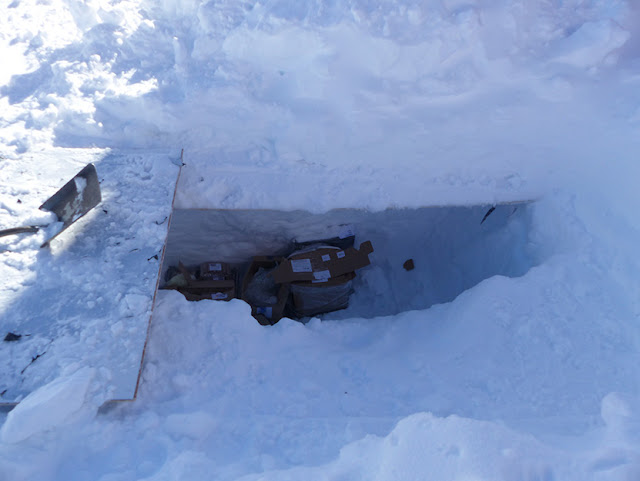 I can jump down in to the freezer and grab what I need. I dug some holes in to the side of the wall which enable me to clamber out.

We buried two reefers with the majority of our frozen stock in a large hole last season. This was only accessible using the digger to dig it out and the crane to lift it out and onto sledges to move it to the Drewry with the Piston Bully. So it's a big big job for the garage as they had to get all those vehicles de-winterised and then get time to excavate these containers. The frozen supplies have done well over the winter, as expected, and this week they were dug up and relocated to outside the Drewry to be plugged in. I had mentioned my little hole-in-the-ground freezer and the reefers in a previous post here. 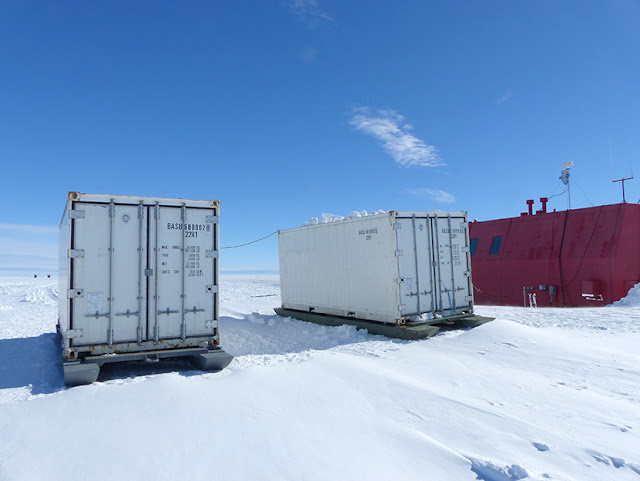 I plucked up the courage to have a nosy at them yesterday. It’s a daunting prospect having all that food to manage (I haven’t even posted about the containers full of dry food yet!). All our food is packed into containers in the UK – on to pallets that are stacked high and then cling-filmed around to keep them in blocks. And this is the case in these reefers too. They also get moved around quite a bit before they get to us, so if there are loose bits and bobs these get shimmied from side to side quite a bit. We do not have the luxury of unloading these into better spaces and organising it and so all our food is there,... in those containers, ...but not necessarily accessible. And of course the item you want is at the bottom of a huge stack right at the back! The reality is you just work with what you can get your hands on, until you work through enough stuff so you can get your hands on other items. 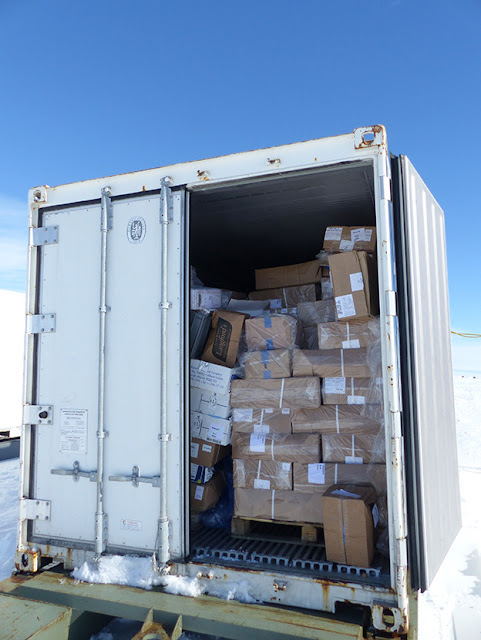 In other news the Weatherhaven tents went up this week giving the Field Guides and Scientists sheltered areas they can sort their kit out in . Space is at a bit of a premium here ironically. 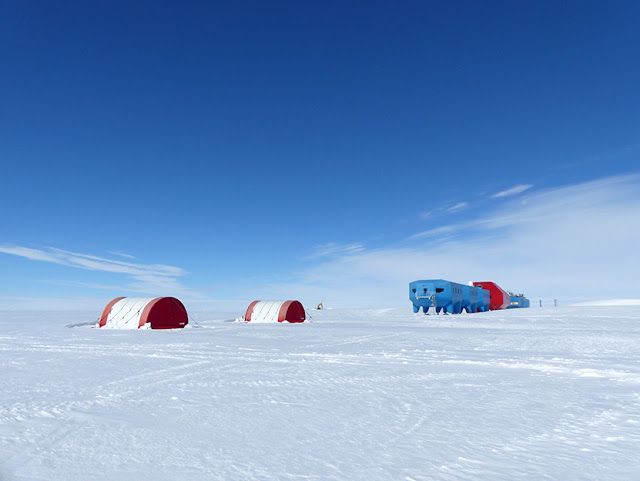 And in amongst worky bits and bobs there is the odd moment for a bit of down time. Al and I have managed the odd ski out to the perimeter. 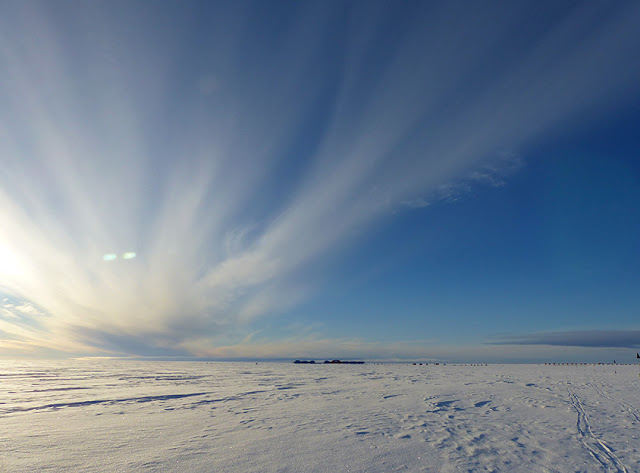 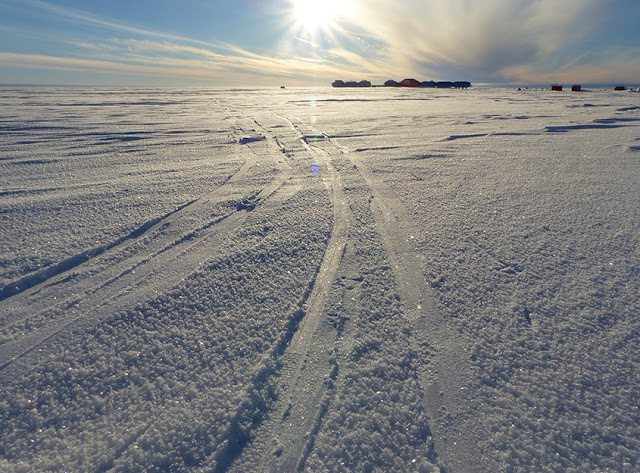 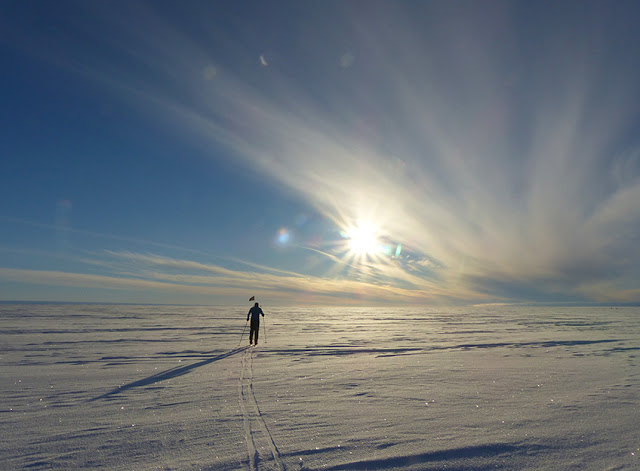 A couple of weeks ago we had a little ceremony here to put the Halley signpost back in its’ rightful spot. Stu, one of our mechanical services leads, took this lovely pic. The small team who were first in at the start of the season had done a really great job, which enabled the rest of us to be there. So it was nice to acknowledge that and to take a bit of pride in our base and keeping her going under difficult circumstances. It’s no mean feat! 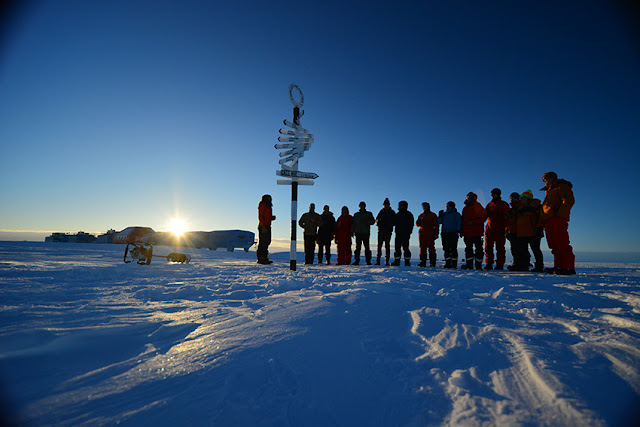